What is a Tsunami? A tsunami is a sea wave, (more precisely, a series of waves), of local or distant origin that results from large-scale seafloor displacements associated with large earthquakes, major submarine slides, or exploding volcanic islands. A tsunami can be caused by a sudden vertical movement of a large area of the sea floor during an undersea earthquake and travels at speeds in excess of 450 mph. The first wave is almost never the largest and damaging waves may potentially arrive for hours. A tsunami is sometimes called a tidal wave, but this term is a misnomer. Unlike regular ocean tides, tsunamis are not caused by the tidal action of the moon and sun. 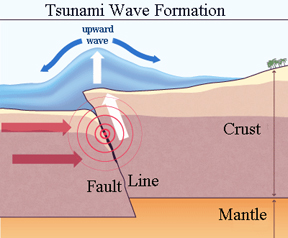 The most common cause of a tsunami is an underwater earthquake.
Image: How Stuff Works (modified) 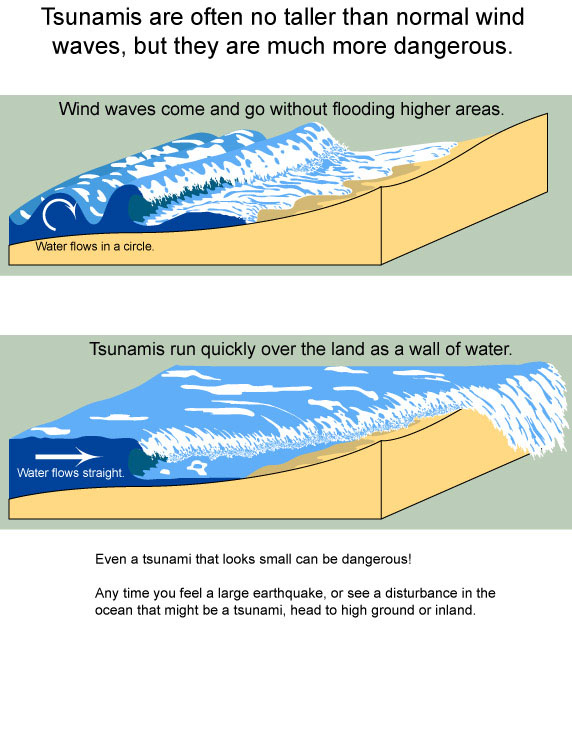 What To Do: When you are at the beach and feel an Earthquake: A strong off-shore earthquake may generate a tsunami. Therefore, if you feel the ground shake, evacuate to high ground immediately and return only after officials say it is safe to do so. Tsunamis along the Pacific Coast. From southern British Columbia to northern California, people and property are at risk both from distantly and locally generated tsunamis. Recent studies indicate that about a dozen earthquakes (with magnitudes of 8 or more) have occurred in the Cascadia subduction zone west of Washington. (Map) In 1946, a tsunami was initiated by an earthquake in the Aleutian Islands of Alaska; in less than 5 hours, it reached Hawaii with waves as high as 55 feet. (NOAA) More recently, in 1964, a magnitude 9.2 earthquake occurred in Prince William Sound, Alaska. The shock generated a tsunami that deviated many towns along the Gulf of Alaska, and left serious damage at Alberni and Port Alberni, Canada, along the West Coast of the United States (15 killed), and in Hawaii. The maximum wave height recorded was 67 meters at Valdez Inlet. Seiche action in rivers, lakes, bayous, and protected harbors and waterways along the Gulf Coast of Louisiana and Texas caused minor damage. It was also recorded on tide gages in Cuba and Puerto Rico. (USGS)

The 1964 Alaskan tsunami generated waves of more than 20 feet at Crescent City, California, where it caused $7.5 million in damage and 11 deaths. It also produced waves ranging from 10 to 16 feet along parts of the California, Oregon, and Washington coasts. (USGS) Photo: Del Norte County Historical Society

The rate at which a wave loses its energy is inversely related to its wavelength. Since a tsunami has a very large wavelength, it will lose little energy as it propagates. Thus, in very deep water, a tsunami will travel at high speeds with little loss of energy. For example, when the ocean is 6100 m deep, a tsunami will travel about 890 km/hr, and thus could travel across the Pacific Ocean in less than one day. (Washington State Dept. of Resources) Tsunami wave travel-time map 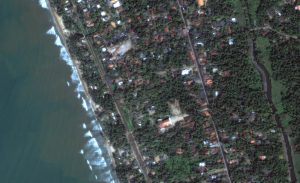 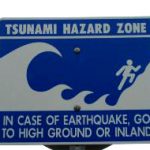 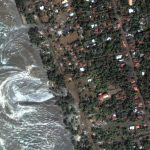 Tsunami Warning Signs: Posted along beaches throughout California to alert people to the potential danger.

A magnitude 9.0 (Mw) earthquake occurred on Sunday December 26 at 00:58 UTC of 6:58 AM local time in Sumatera. This earthquake occurred as the result of stresses generated by the motion of the Indo-Australian plate northeastward against the Burma subplate of the Eurasian plate at a rate of approximately 5 cm/yr (about two inches per year). Deformation of the Earth’s crust in response to the plate motion takes place in a broad zone that spans the entire length of Indonesia extending north to the Andaman Islands of India and east of Timor Island. Aftershocks define a rupture zone about 650 miles long extending from Northern Sumatera to the Andaman Islands. The earthquake produced a tsunami that affected the entire Indian Ocean. Peak runup was at least 20 meters (60 feet) in Indonesia and 5-10 meters in Sri Lanka more than 1000 miles from the source area. The first tsunami waves reached the coast of Northern Sumatera within minutes of the earthquake. The tsunami traveled outward across the Indian Ocean reaching Sri Lanka about 2 hours later. Somalia and the east coast of Africa were hit 7 hours after the earthquake. The earthquake is the fourth largest global earthquake ever recorded since seismograph were developed in the late 1800s. It is an unprecedented event for the Indian Ocean in historic times. However paleoseismic studies of Kerry Sieh and his coworkers using corals to study early earthquakes on the Sumatran subduction zone estimated a M 8.8 9.2 earthquake occurred in 1833, (JGR, v. 104, no. B1, p. 895-919, 1999). They further infer that giant earthquakes break the subduction zone at intervals of about 230 years (2004 fall AGU abstracts T12B-04, PA23A-1444). Source: Dr. Lori Dengler, Humboldt State University